Menu
Throughout his lifetime Peder Moos designed a very limited amount of elegant wooden furniture pieces that were almost always made to order and produced by himself. The Danish master from Southern Jutland was an exceptionally gifted joiner who had a unique approach to the art of cabinetmaking. His inspiration drew on a century-old tradition of wood crafting and he was capable of realising slender dimensions while using only the most impeccable woods.

Moos was born shortly after the turn of the 20th Century, and he has since then become known for his almost magical ability to form wood and his exquisite sense for detailed carpentry. Moos' curved wooden shapes are evocative of a past Art Nouveau style and yet all his pieces also bear their very own uniquely Scandinavian elegance.

After working abroad in France and studying at the Royal Danish Academy of Fine Arts under the masters Einar Utzon-Franck and Kaare Klint from 1935 to 1938, Peder Moos opened his Copenhagen-based workshop.

His unconventional and uncompromising approach to cabinetmaking earned him the reputation of one of the most original figures in the history of Danish design. He was “a man for whom the work itself [was] sacred and who considered the economic result to be an irrelevant banality” (Grete Jalk, ed., Dansk Mobelkunst gennem 40aar, Volume 3: 1947-1956, Copenhagen, 1987, p.24). Customers needed to wait patiently for their commissions and Moos' pieces often came at quite the cost. It was his firm belief that artistic pieces of high quality could not be priced prior to their actual making.

Price was never a limit, which in combination with masterfully skilled craftsmanship, distinguished Peder Moos' furniture as instant museum pieces. He contributed works to the Cabinetmaker's Guild exhibitions and received praising feedback from the critics: “One marvels at the fact that it is possible to bring the art of furniture making to such a degree of perfection” (ibid.).

In the wake of the Second World War he made a group of extraordinary solid walnut furniture pieces, which are characterised by drumstick legs and curved contours. Moos skilfully achieved the delicate finish and feel of the wood by repeatedly sanding off layer by layer of the material.

Among this group of pieces that was privately commissioned and made in 1949 is a large, rectangular dining table, an armchair with horizontal slats and a pair of 'pierced'-back side chairs decorated with fine box wood inlays. The seats and backs of the two side chairs are upholstered in their original sand-coloured fabric. 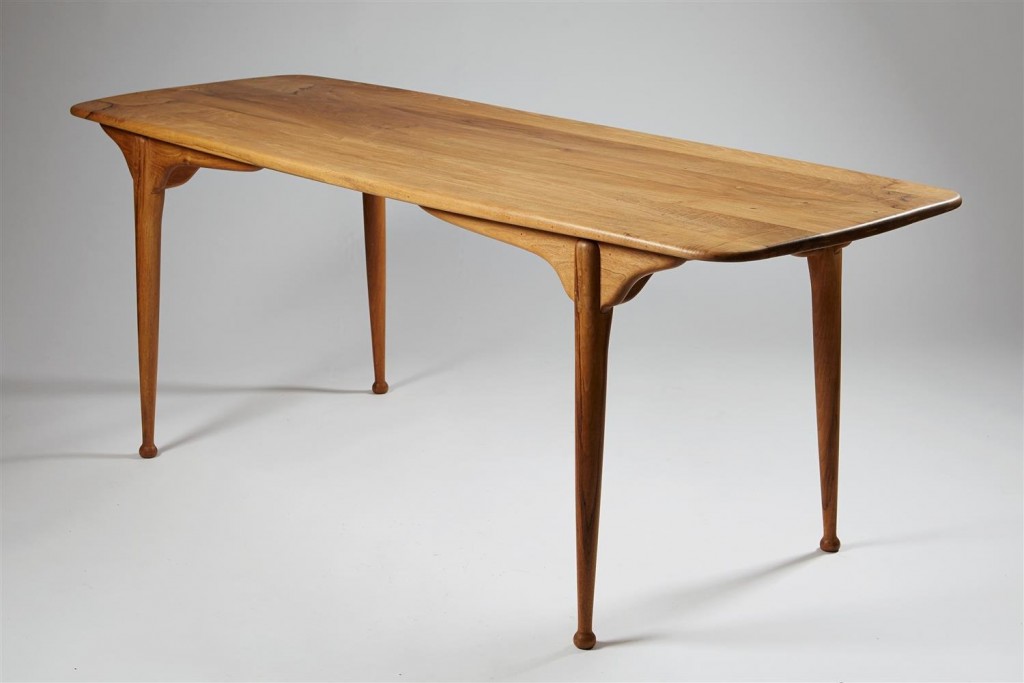